Weather:
Overcast.
Some drizzle on and off in the morning. No heavy rain. 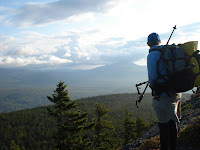 Today was proof that when you take me out of my routine I completely loose it....and my stuff. After waking up at 5:30am we made our way down chairback mountain. When we reached the stream (a shallow ford) it started to drizzle. I put down my pack to prep it for rain. When I went to grab my iPod to put it away it was no longer in the side pocket. Sh$t! Are you kidding me?!!? It's not even my iPod! Ugh!! "It's just a thing, it's just a thing, it's just a thing" I chanted to myself over and over and over again. Just one more material thing that I will have lost on this trip. Really, I was OK with losing it, I was less OK knowing that despite the heads up that I gave to Bill when he lent me the iPod that something like this was possible I was feeling incredibly guilty and irresponsible. How did I not notice that it fell out of my pack? How did I not hear it? Grommet offered to back track to see if we could find it, but without knowing where exactly it fell out it would take way to long to find. Plus it was starting to rain so by the time we found it it would be wet and ruined anyway. No point in turning around and searching for it. Time to suck up my loses and hike on.

After eating a morning snack we started the 5 mile climb up to Carl A. Newhall Lean-To for lunch. For the first time since Grommet and I have been hiking alone together she took off in front of me and I followed about ten minutes behind. The hike up to the lean to was nice and gradual and I was stopping occasionally to take pictures that captured the essence of the trail in Maine; roots, lots and lots of roots. Around 12:30 I knew I was close to the shelter, I reached down to grab my camera to take anther picture of a nearby lake. It wasn't there. The camera was gone. "Are you kidding me?!!?" I literally screamed out load. I quickly checked my side pockets thinking that I may have brainlessly stuffed it there. Nope, not there. Instead I had brainlessly dropped it somewhere within the last mile and a half. How did I not hear it hit the ground? Is this really happening again???? I needed to go find it but Grommet would have no idea what was going on. I knew she would worry when I didn't show up but I also knew it would be pointless to continue forward only to have to walk back again to go find it. I decided to drop my pack and leave her a note. At 12:37pm I started running down the trail, I reached the scene of the incident by 12:59 which was a good mile or more. It took another 23 minutes to get back to my pack. I had half expected to see Grom reaching my pack and the note I left about the time that I arrived back but there wasn't any sign of her. I threw my packed on and plugged forward. Sure enough, I wasn't even 5 minutes down the trail before I caught site of Grommet running Southbound worried as hell that I had taken a plunge and was lying hurt somewhere. It took another 5 minutes to reach the shelter. It was nearly 2pm and neither one of us had eaten lunch yet. We were completely famished.

We sat at the lean-to for lunch and just as we were packing up to leave Stats walked up with the biggest grin on his face, looks at me and says he had something that belonged to me. No way!!!! He had my iPod. I couldn't believe it. He even found it before the rain started and had it wrapped up in a ziplock bag for me. Unbelievable. Stats - you're my trail hero!!!!! (I still owe you a beer man!) I had also been feeling guilty as sin for wasting an hour of our day because I had dropped my camera. However, if I hadn't we never would have seen Stats that day to get my iPod back. Guess everything worked out the way it should have. Lesson learned. Check, double check and double check again. 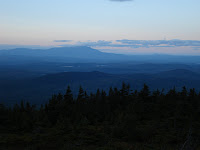 Our afternoon was spent climbing up and down our last mountain range...ever. So weird. This range was a series of four mountains; Gulf Hagas Mountain, West Peak, Hay Mountain, and White Cap Mountain. We reached the summit of White Cap at sunset and made our way over to the view point. Here we were presented with our first view of Katadhin (Baxter Peak). Incredible. The moment was completely surreal. There I was standing on top of the last mountain range I would climb across on this trip, staring at what I've been working toward for months. The sky behind her was shades of blues, purples, and pinks. She was massive. I couldn't believe my eyes.

The light in the sky begin to fade quickly as we made our decent, so keeping with our routine we descended White Cap in the dark. Bad ass. We made it to Logon Brook Lean-To by 8pm, cooked dinner, and called it a night.
Posted by rralbritton at 7:25 AM

Labels: On the Trail 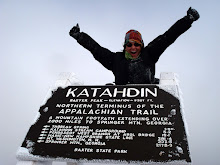